The Rashtrakutas called themselves descendants of one named Satyaki. But there is difference of opinion about their origin among the historians. According to some they were originally of Dravidian peasant extraction. From some of the inscriptions of the Chalukya kings it is known that the Rashtrakutas were feudatories of the Chalukyas. Perhaps their original home was Karnataka and their mother tongue was Kanarese.

Dantidurga was succeeded by his uncle Krishna I. He conquered the territories that were still under the Chalukyas and thereby competed conquest of the Chalukya territories. He also occupied Konkan. It is not known for certain the name of the country over which Rahappa used to rule. Vishnuvardhana of Vengi and the Ganga king of Mysore were defeated at the hands of the Rashtrakuta King Krishna I.  The Kailash Temple at Ellora was built by the Rashtrakuta King Krishna I. He was a great patron of art and architecture.

Krishnaraja’s eventful career came to an end within a very short time and he was succeeded by his son Govindaraj who ruled for some time as Govinda II. His worthlessness as a ruler and his lack of interest in administration led to his deposition by his brother Dhruva who ascended the throne himself. 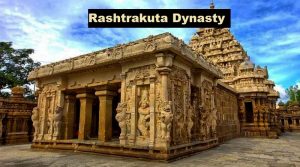 Dhruva was by far the best ruler of the Rashtrakuta dynasty. He ruled for a short span of time but within this short time he entered into struggle with the Gurjara-Pratihara King Vatsyaraja and defeated him signally. He also like wise defeated the Pallavas of Kanchi and the Pala King Dharmapala of Bengal.

Dhruva was succeeded by Govinda III his son and with almost equal vigor as of his father. He succeeded in keeping the Gurjara power sufficiently under control. He defeated the great Gurjara King Nagabhatta II. It is said that the Pala King Dharmapala and his protégé Charayudh sought the help of Govinda III. Govinda III made the Rashtrakutas dynasty one of the most powerful dynasties of contemporary India. His kingdom spread up to the Vindhyas and Malava in the north and the river Tungabhadra to the south.

The greatest king of the Rashtrakuta dynasty was Amoghavarsha I. As a warrior he was, however, no match with his father Govinda III, but he succeeded in defeating the East-Chalukya kings.  Amoghavarsha I set up a new capital at Manyakheta (now Malkhed in Karnataka State) and during his reign Broach became the best port of his kingdom.  Amoghavarsha I was a great patron of education and literature. From the evidence of the Jaina works it is known that Amoghavarsha was converted into Jainism by Jinasena, a Jaina monk.

Amoghavarsha spent the accumulated wealth of his predecessors to beautify his kingdom.  Suleman, an Arab merchant, in his account called Amoghavarsha I as one of the four greatest kings of the world, the other three being the Caliph of Bagdad, the king of Constantinople and the emperor of China.

The last powerful and efficient king of the Rashtrakutas was Krishna III. He had a prolonged struggle with Mahipala, the Gurjara king. He also succeeded in conquering Tanjore and Kanchi. In the middle of the tenth century for a time he succeeded in defeating the Tamil kings of Chola kingdom. But towards the end of the same century the Rashtrakuta King Kaka was defeated and deposed by Taila or Tailapa, the Chalukya king of Kalyani. With Kaka’s defeat the Rashtrakuta power came to an end.

The Rashtrakutas contributed much to the architectural heritage of the Deccan. Art historian Adam Hardy categorizes their building activity into three schools: Ellora, around Badami, Aihole and Pattadakal, and at Sirval near Gulbarga. The Rashtrakuta contributions to art and architecture are reflected in the splendid rock-cut cave temples at Ellora and Elephanta, areas also occupied by Jain monks, located in present-day Maharashtra. The Ellora site was originally part of a complex of 34 Buddhist caves probably created in the first half of the 6th century whose structural details show Pandyan influence. Cave temples occupied by Hindus are from later periods.

The Rashtrakutas renovated these Buddhist caves and re-dedicated the rock-cut shrines. Amoghavarsha I espoused Jainism and there are five Jain cave temples at Ellora ascribed to his period.The most extensive and sumptuous of the Rashtrakuta works at Ellora is their creation of the monolithic Kailasanath Temple, a splendid achievement confirming the “Balhara” status as “one among the four principal Kings of the world”. The walls of the temple have marvellous sculptures from Hindu mythology including Ravana, Shiva and Parvathi while the ceilings have paintings.