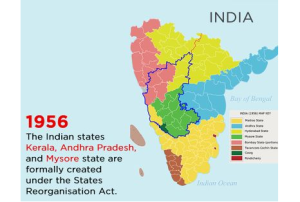 The demand for states on a linguistic basis had started even before independence. This attained more strength after the initial political integration of provinces and princely states. However, the government got concerned that the state solely formed on a linguistic basis might be unsuitable and might pose some potential risk to the unity of the nation.

On June 17 1948, Dr Rajendra Prasad set up a linguistic provinces commission including SK Dhar, popularly known as the Dhar commission.  They recommended the reorganization on the basis of:

However, resentment continued and the Dhar commission was followed up by JVP committee. Amidst all this, the first constitutional amendment is passed in 1951. It provided against abuse of freedom of speech and expression, validation of zamindari abolition laws, and clarified that the right to equality does not bar the enactment of laws which provide “special consideration” for weaker sections of society.

It amended Article 19 for the purposes indicated above and to insert provisions fully securing the constitutional validity of zamindari abolition laws in general. Article 31A and 31B was introduced to validate enactments related to Zamindari Abolition. It brought in schedule 9 of the constitution to protect the land reform and other laws present in it from the judicial review.