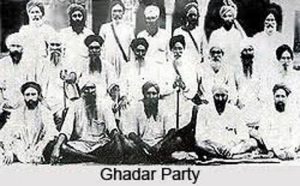 The outbreak of the First World War in 1914 gave an impetus to the nationalist feelings in Indians. The Home Rule League by Lokmanya Tilak and Annie Besant were formed during First World War.

At the same time, a revolutionary movement gained popularity – The Ghadar Movement.

The Ghadar Movement was an international political movement founded by expatriate Indians to overthrow British rule in India.  The early membership was composed mostly of Punjabi Indians who lived and worked on the West Coast of the United States and Canada. The movement later spread to India and Indian diasporic communities around the world.

The main leader initially was Bhagwan Singh, a Sikh priest who had worked in Hong Kong and the Malay States.  Later Har Dayal took leadership and played a crucial role in the Ghadar movement. He issued a Yugantar Circular praising the attack on the Viceroy. He urged Indians in the USA not to fight against the US but use the freedom in the US to fight the British.  The Ghadar militants toured extensively, visiting mills and farms where most of the Punjabi immigrant labour worked. The Yugantar Ashram became the home and headquarters and refuge of these political workers.

Ghadar leaders completely underestimated the extent of preparation needed at every level — organizational, ideological, strategic, tactical, financial — that was necessary before an armed revolt could be organized. An almost non-existent organizational structure; the Ghadar Movement was sustained more by the enthusiasm of the militants than by their effective organization.