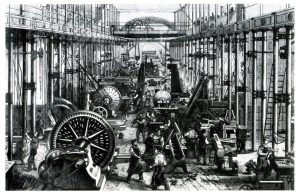 This phase of Colonization coincided with the Industrial Revolution in Western Europe and the United States of America. The relative technological supremacy and decadence in the Eastern states meant that Europe could interfere in the internal affairs of these states.

Colonialism reached its logical conclusion with the rise of new industrial powers in Europe – Germany and Italy. This lead to a competition for accruing larger and larger empires that meant more power and prestige to these countries. This was most pronounced in the tragic event of Scramble for Africa.