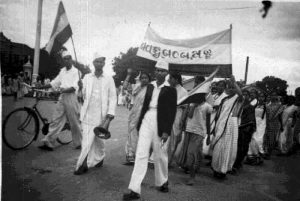 .   From conservative moderation to political extremism, from terrorism to incipient socialism, from petitioning and public speeches to passive resistance and boycott, all had their origins in the movement.

The movement popularised the use and consumption of indigenous products. Indians started ditching British goods for Indian products.  Women, students, and a large section of the urban and rural population of Bengal and other parts of India became actively involved in politics for the first time with Swadeshi Movement.  The message of Swadeshi and the boycott of foreign goods soon spread to the rest of the country.

The militant nationalists led by Bal Gangadhar Tilak, Bipin Chandra Pal, Lajpat Rai and Aurobindo Ghosh were in favour of extending the movement to the rest of India and carrying it beyond the programme of just Swadeshi and boycott to a full-fledged political mass struggle. For them, the aim was Swaraj.  In 1906, the Indian National Congress at its Calcutta Session presided over by Dadabhai Naoroji, declared that the goal of the Indian National Congress was ‘self-government or Swaraj like that of the United Kingdom or the Colonies.

There were differences in the ideologies with the congressmen who were popularly known by the names Moderates and the Extremists. They had differences of opinion regarding the pace of the movement and the techniques of struggle to be adopted. This came to a head in the 1907 Surat session of the Congress where the party split (the two factions re-joined later).  This period also saw a breakthrough in Indian art, literature, music, science and industry.

It was, perhaps, in the cultural sphere that the impact of the Swadeshi Movement was most marked. The songs composed at that time by Rabindranath Tagore, Rajani Kanta Sen etc became the moving spirit for nationalists of all hues.  In art, this was the period when Abanindranath Tagore broke the domination of Victorian naturalism over Indian art and sought inspiration from the rich indigenous traditions of Mughal, Rajput and Ajanta paintings.  In science, Jagdish Chandra Bose, Prafulla Chandra Ray, and others pioneered original research that was praised the world over.