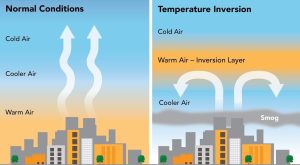 The phenomenon in which temperature increases with increasing altitude temporarily and locally under certain conditions is known as inversion of temperature. Inversion is usually of short duration but quite common nonetheless. Long winter night, clear sky, dry air and absence of winds leads to quick radiation of heat from the earth’s surface, as well as from the lower layers of the atmosphere.

This results in the cooling of the air near the earth’s surface. The upper layers which lose their heat not so quickly are comparatively warm. Hence the normal condition, in which temperature decreases with increasing height, is reversed. The cooler air is nearer the earth and the warmer air is aloft. In other words, temperature increases with increasing height temporarily or locally.

The phenomenon of inversion of temperature is mostly observed in intermontane valleys due to air drainage. During winters the mountain slopes cool very rapidly due to the quick radiation of heat. The air resting above them also becomes cold and its density increases. Hence, it moves down the slopes and settles down in the valleys. This air pushes the comparatively warmer air of valleys upwards and leads to the phenomenon of inversion of temperature.

Sometimes the temperature falls below freezing point in the valleys leading even to the occurrence of frost. In contrast, the higher slopes remain comparatively warmer. This movement of heavy and dense cold air towards the valley slopes almost like water is termed as air drainage.