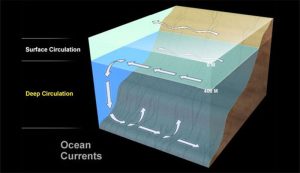 The major movements of the ocean waters can be classified into three. They are:

Waves are nothing but the oscillatory movements that result in the rise and fall of water surface. Waves are a kind of horizontal movements of the ocean water. They are actually the energy, not the water as such, which moves across the ocean surface. This energy for the waves is provided by the wind.

Tide are the periodical rise and fall of the sea levels, once or twice a day, caused by the combined effects of the gravitational forces exerted by the sun, the moon and the rotation of the earth.

The ocean currents are the horizontal flow of a mass of water in a fairly defined direction over great distances. They are just like a river flowing in an ocean. Ocean currents can be formed by the winds, density differences in ocean waters due to differences in temperature and salinity, gravity and events such as earthquakes.