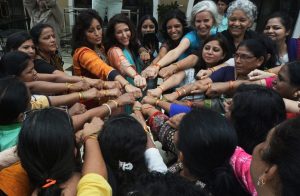 Gender inequality is the social process by which men and women are not treated as equals. The treatment may arise from distinctions regarding biology, psychology, or cultural norms. Some of these distinctions are empirically-grounded while others appear to be socially constructed. The under-representation of women in the workforce is both a social and economic loss. Globally, female participation in the labour force is about two-thirds that of men. There are still unwritten rules that a woman of today is expected to not overstep in any circumstances which are guided by ‘soft patriarchy’. Women also lack equal inheritance rights leading to Feminization of poverty.

India has slipped 28 places to rank 140th among 156 countries in the World Economic Forum’s Global Gender Gap Report 2021, becoming the third-worst performer in South Asia. According to the report, India has closed 62.5% of its gender gap till date.

The decline also took place on the economic participation and opportunity subindex.  Most of the decline occurred on the political empowerment subindex, with a significant decline in the number of women ministers.

There is a decline is a decrease in women’s labour force participation rate. The estimated earned income of women in India is only one-fifth of men’s, which puts the country among the bottom 10 globally on this indicator. Discrimination against women is also reflected in the health and survival subindex statistics. Wide gaps in sex ratio at birth are due to the high incidence of gender-based sex-selective practices.

As the experience with rural self-help groups shows, women are remarkably prompt at repaying loans and the government should step up the amounts and ease loan disbursement for women.

Policy measures could include addressing or reducing the amount of unpaid work and rebalancing it between men and women, supporting employer or state-funded provision of childcare, and interventions to address digital and financial inclusion. The family needs to adjust to the changing role of women and volunteer to share household work.

Introducing part-time and flexi-time work facilities to avoid their burnout. Results suggest that men’s wages will also increase as a result of greater inclusion of women in the labour force since productivity will increase.