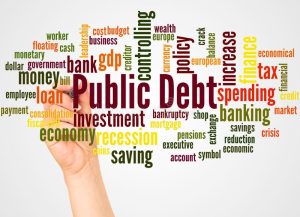 Income and Revenue: The target of public debt normally is to cover the gap that developed due to mismatch between proposed expenditure and expected revenue.  Whenever because of increased administrative expenditure or flood, feminine, earthquake and communicable diseases like unexpected problems, the government’s income becomes less because they have to spend it to cover these problems.

In Times of Depression: Depression is the condition when costs reduce, there is a lack of courage in people spending money on industries and in future there is no possibility of getting gain.

To Curb Inflation: Inflation is the name of that condition at the time of increased cost. So, the government by taking debt can take back a big quantity of work power from the hands of people.

India’s public debt (combined liabilities of the Central and State governments) to gross domestic product (GDP), at constant prices, increased to a record high of 100.86 per cent in 2020 as against 76.86 per cent in 2014, as per the data from the Reserve Bank of India.

UDAY bonds: The liabilities of states have increased during 2015-16 and 2016-17, following the issuance of Ujwal Discom Assurance Yojna (UDAY) bonds.

Small Share of Taxes in National Income: After India got independence, there is an increase in national income four times more.