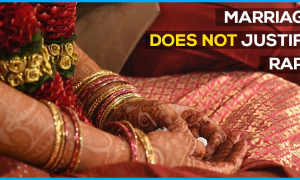 . A recent case in Chhattisgarh High Court hasreignited the debate about non-criminalisation of marital rape. Even though many legal amendments have been done in criminal law forthe protection of the women, the noncriminalization of marital rape in India undermines the dignity and human rights of women. Not with standing this, the discrepancies and failings of Indian criminal law, highlighted by the judgment, deserve scrutiny.

Inconsistent Provision: A husband may be tried for offences such as sexual harassment, molestation, voyeurism, and forcible disrobing in the same way as any other man.  Moreover, husband separated from his wife may even be tried for rape (Section 376B). However,the marital rape exception is inconsistent with other sexual offences.

Patriarchal Beliefs: The marital rape exception is an insult to the constitutional goals of individual autonomy, dignity and of gender equality enshrined in fundamental rights such as Article 21 (the right to life) and Article 14 (the right to equality).

In Joseph Shine v. Union of India (2018), the Supreme Court held that the offence of adultery was unconstitutional because it was founded on the principle that a woman is her husband’s property after marriage.

Destroy the Institution of Marriage: A commonly cited rationale even by the government for preserving the maritalrape exemption isthatrecognisingmaritalrape as a criminal offence would ‘destroy the institution of marriage’.

Doctrine of Coverture: Non-Criminalised nature of Marital rape emanates from the British era. The Maritalrape islargely influenced by and derived from this doctrine of merging the woman’s identity with that of her husband.

Indian law now affords husbands and wivesseparate and independent legal identities, and much jurisprudence in the modern era is explicitly concerned with the protection of women. Therefore, it is high time that the legislature should take cognisance of this legal infirmity and bring marital rape within the purview ofrape laws by eliminating Section 375 (Exception 2) of IPC.