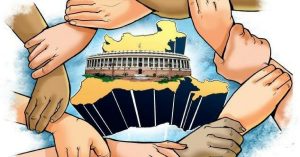 . Federalism believes in shared sovereignty and territoriality between multiple constituent units of governance. In India, Federalism is a device to accommodate India’s multiple linguistic, religious, and ethnic identities.

Presently, in different parts of the world, the federal system of government is facing some of its biggest trials yet, from the Covid-19 pandemic. However, much before the pandemic, the federal principles in India have been under pressure, to co-produce a political culture of flexible federalism. Today, the union and states often share a conflicting stance on issues like vaccines, Goods and Services Tax (GST), appointment of Chief Secretary, and much more. This growing tension can also be seen in a possibility of re-emergence of the Third front Government (Union government formed by coalition of several regional parties).

The downgrading of a full-fledged State in Jammu and Kashmir into a Union Territory in 2019, or more recently, the notification of the NCT of Delhi (Amendment) Act, 2021, reflected the centralising tendencies of the Union government. Similarly, the union government had invoked the Epidemic Diseases Act and the Disaster Management Act, centralising the powers to deal with the pandemic. However, state consultation is a legislative mandate cast upon the centre under these acts and binding Covid-19 guidelines are being issued by the Centre to the States.

Growing divergence between richer (southern & western) and poorer States (northern & eastern), remains an important source of tension in inter-State relations that can become a real impediment to collective action amongst States.

This has created a context where collective action amongst States becomes difficult as poorer regions of India contribute far less to the economy but require greater fiscal resources to overcome their economic fragilities.