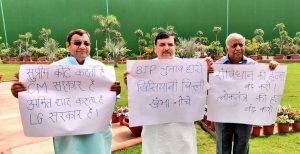 Parliament recently passed the National Capital Territory of Delhi (Amendment) Bill, 2021, which significantly increases the powers of the Lieutenant-Governor (L-G) of Delhi. Despite the nature of the sweeping changes this bill proposed, it was not sent to a parliamentary committee, and there was no formal consultation with stakeholders, civil society, or experts before it was quickly rushed through both Houses of Parliament. The bill, first reported by media early this month, was introduced in the Lok Sabha on March 15 and passed by both Houses by March 24. Even before citizens had any time to absorb its implications or make up their mind, the bill was already on its way to becoming law.

For a parliamentary democracy, this is unusual. Typically, bills of such significance are sent to parliamentary committees for closer scrutiny. Unfortunately, sidelining committees is increasingly becoming the norm in India. Over the last few years, Parliament has been sending fewer and fewer bills to committees. Data compiled by PRS Legislative Research shows that only 25% bills were referred to committees in the 16th Lok Sabha (2014-2019) as compared to 60% in the 14th (2004-2009) and 71% in the 15th Lok Sabha (2009-14).

While fewer bills have been going to committees, data also shows that Parliament has been working more in recent years, discussing bills for longer durations and passing more bills than before. The 16th Lok Sabha (2014-19) for instance, worked for over 1,615 hours, 20% more than the previous Lok Sabha, and passed 133 bills, 15% more than the 15th Lok Sabha. Interestingly, even in the case of the NCT amendment, the Rajya Sabha stayed back till 9:30 pm to finish its deliberations and pass the bill before adjourning.

Spending more time on direct discussions is not a substitute for committee deliberations. There is rarely enough time for a thorough analysis of any legislation on the floor of Parliament. Most MPs are also not subject matter experts on the topics being discussed — they are generalists who understand the pulse of the people but rely on advice from experts and stakeholders before taking decisions. What committees are meant to do is help MPs seek expertise and give them time to think about issues in detail. This is why the committee system was expanded in 1993.