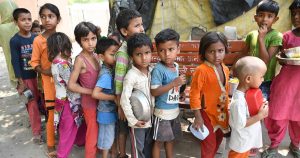 .  India was home to the largest number of undernourished people in the world even before the Covid-19 pandemic. The latest edition of the State of Food Security and Nutrition in the World (SOFI) report, released jointly by five UN organisations in July, reveals that the pandemic and failure on the part of state to combat its effects, has led to a significant increase in the prevalence of hunger and food insecurity in the country.

According to the data presented in the report, the prevalence of moderate to severe food insecurity in India rose by about 6.8 percentage points in 2018-20. In absolute terms, the number of persons facing moderate to severe food insecurity has increased by about 9.7 crore since the outbreak of Covid. The irony is that this happened when the government had an unprecedented 100 million tonnes of food grains in its godowns — larger than the food stocks of any country. The country with the largest stock of grain in the world — 120 million tonnes as of July 1, 2021 — accounts for a quarter of the world’s food-insecure population. Estimates show that, in 2020, over 237 crore people were grappling with food insecurity globally, an increase of about 32 crore from 2019. South Asia alone accounts for 36 per cent of global food insecurity.

Despite being self-sufficient in the production of major food commodities, problems of hunger and food insecurity are grave in India because of widespread economic distress, high unemployment and high levels of inequality. A large proportion of the poor is dependent on the informal economy in which incomes are too low and uncertain. Unemployment rates have risen sharply over the last few years. High (and fluctuating) food prices, shrinking public investment and the economic slowdown have compounded the distress among working classes and the peasantry. With low and uncertain incomes, families dependent on the informal economy do not have assured access to adequate and nutritious food. These longstanding problems were aggravated last year because of lack of preparation to deal with the pandemic.

The sharp increase in food insecurity points to an urgent need for the government to establish systems for regular monitoring of the food security situation in the country and to universalise access to the public distribution system, at least during the pandemic. Everyone, irrespective of whether they have a ration card or not, should be allowed to take subsidised grain from ration shops. With almost 120 million tonnes of grain currently lying with the government, it requires almost no additional resources.