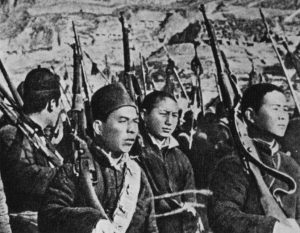 In 1934 the Communists suffered huge losses against the Nationalists in the Chinese Civil War. Faced with the prospect of annihilation the leaders of the Communist army chose to start what is now called the Long March. This was a tactic of withdrawal into mountainous areas, some 2500 miles to the north and west.

In 1934 the Communists found themselves encircled by Nationalist forces. Four times they beat back Nationalist troops. A fifth assault was coming and the Nationalists had learnt from the mistakes of the first attempts. Large fortifications had been dug from which the Nationalists could engage with any Communist troops making an assault. The Communists changed tactics, Mao was removed as local party chairman. HIs replacements adopted a conventional strategy. The troops were annihilated.

Seeing the encirclement and the failure of the conventional method of warfare, new tactics were adopted. There was a breakout through the weakest part of the nationalist lines. Methods were used to confuse the Nationalists. The decoys worked and some 85000 of them broke through the lines into open land. It was days before the nationalists realised that the main body of Communist troops had escaped. The breakout was the first part of the plan.

The Communist forces were in the newly declared Chinese Soviet Republic of Jiangxi. It was no longer safe for them there. As the Communists marched away from danger Mao began to reassert his position as leader. Under his direction, the forces made for Shaanxi province in the North West of China.  In the North West the Communists hoped to gain support from the peasants. They could do this through fighting the invading forces of the Japanese Imperial Army. The march lasted just over a year. It covered an estimated 4000 miles. Exact numbers of men who made it through the entire journey are not known but estimates suggest it was around 8000.