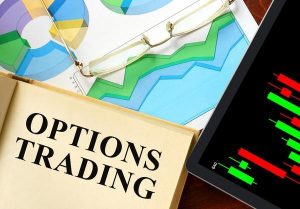 Options are a type of derivative security. They are a derivative because the price of an option is intrinsically linked to the price of something else. Specifically, options are contracts that grant the right, but not the obligation to buy or sell an underlying asset at a set price on or before a certain date. The right to buy is called a call option and the right to sell is a put option.

Call options give the option to buy at certain price, so the buyer would want the stock to go up.

Put options give the option to sell at a certain price, so the buyer would want the stock to go down.