The 12th and the 13th centuries saw the emergence of the Kakatiya dynasty. They were at first the feudatories of the Western Chalukyas of Kalyani, ruling over a small territory near Warangal. A ruler of this dynasty, Prola II (1110–1158) extended his sway to the south and declared his independence. His successor Rudra (1158–1195) pushed the kingdom to the east up to the Godavari delta. He built Warangal Fort to serve as a second capital and faced the invasions of the Seuna Yadavas of Devagiri. The next ruler Mahadeva extended the kingdom to the coastal area. Ganapati Deva succeeded him in 1199. He was the greatest of the Kakatiyas and the first after the Satavahanas to bring almost the entire Telugu area under one unified empire. (Unlike Satavahanas, Kakatiyas are native Telugu kings who used Telugu as court language.) He put an end to the rule of the Velanati Cholas in 1210 and extended his empire till Anakapalle in the north. The most prominent ruler in this dynasty was Rani Rudrama Devi (1262–1289), one of the few queens in Indian history. An able fighter and ruler Rudramba defended the kingdom from the Cholas and the Seuna Yadavas, earning their respect. She remains one of the few female powers of the South India for all time. On the death of Rudrama, her grandson Prataparudra, who was adopted by her as son and as heir apparent on the advice of her father Ganapatideva, ascended the throne at the beginning of the year 1290. Prataparudra had to fight battles throughout his reign against either the internal rebels or the external foes. Prataparudra expanded borders towards the west till Raichur and in the south till Ongole and Nallamala Hills, whilst introducing many administrative reforms, some of which were also later adopted in the Vijayanagar empire. The Kakatiya dynasty faced Muslim onslaughts from 1310 and came under the control of the Delhi Sultanate in 1323. A brief period of 50 years of independence was enjoyed under Musunuri Nayaks who rebelled and liberated Telugu land from the rule of Delhi. Although short lived the Musunuri Nayaks rule was a watershed in the history of south India. Hakka (Harihara) and Bukka, who were previously treasury officers in the court of Prataparudra drew inspiration from them and consolidated Hindu opposition to Muslim invaders. Eventually, after the fall of the Kakatiyas in 1370, the Vijayanagara Empire, considered the last great Hindu and Telugu empire, swept across the Telugu land and the present day Karnataka (1336–1450). Small parts of Telugu region were under Reddys of Kondavidu and Rajahmundry and Recherla Velamas of Telangana, who were content to be vassals of Muslim kingdoms.

The kingdom of Vijaynagar founded by two brothers, Harihar and Bukka, on the south bank of the River Tungabhadra in 1336 AD. According to the legends, they had been the feudatories of the Kakatiyas of Warangal. Later they became ministers in the kingdom of Kampili. After the destruction of Kampili kingdom by Bin Tuglaq they were imprisoned and converted to Islam. Harihar and Bukkaforshook their new master and their new faith and they were readmitted to Hinduism by their guru, Vidyaranya. They established their capital at Vijaynagar. After death of Hoysala ruler VeeraBallala III,  Harihar and Bukka expanded their small kingdom with the distruction of the Hoysala kingdom. They belonged to the Sangama  dynasty.  After Harihar, His brother Bukka, succeeded to the throne of Vijaynagar in 1356 AD.\

The kingdom prospered and continued to expand as Bukka Raya annexed most of the kingdoms of Deccan. He led a crushing defeat on the Shambuvaraya Kingdom of Arcot and the Reddis of Kondavidu by 1360 and the region around Penukonda was annexed. He extended his territory up to Rameswaram after defeated the Sultanate of Madurai in 1371. He had gained an upper hand over the Bahmanis for control of the Tungabhadra-Krishna doab and also took control of Goa by 1374.  He also annexed the kingdom of Orissa (Orya) and Bukka forced the Jaffna Kingdom of Ceylon and Malabar to pay tributes to him. He also moved the capital of the empire to Vijayanagara (now more popularly known as Hampi). 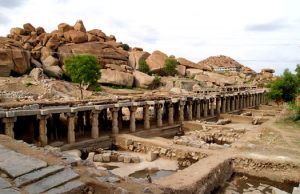 After the death of Bukka, Harihara II ruled from the capital Vijayanagara now more popularly known as Hampi. His greatest success was the capture of Belgaum and Goa in the west from the Bahmanis. Harihar II also sent a naval expedition to Sri Lanka. After a brief period of confusion, Harihara  II succeded by Deva Raya I. Deva Raya I was defeated by the Behmani sultan Firuz Shah and was brought into matrimonial relation with the Bahmanis. But the question of the Krishna- Godavari region led to a renewed conflict between Vijaynagara, Bahmanis and Orissa. After entered into an alliance with Warangal for portioning the region between them, Deva Raya I defeated Firuz Shah and annexed the entire territory upto the mouth of the Krishna river.
Deva Raya II succeeded his father VeeraVijayaBukka Raya after some internal conflicts. Unlike his father, Deva Raya II was a productive and successful ruler. During his reign, he prevailed over his conquest of Kondavidu in 1432, repulsed the invasions of Ahmad Shah I of the Bahamanis and kept hold of the Mudgal fort in 1436 but lost some areas in the Raichur doab in 1443. He defeated the Gajapati of Orissa three times, restored the Reddi Kingdom of Rajamahendri to its former position, fought against the Sultan Ala-Ud-Din, and continued onwards to Kerala where he defeated the ruler of Quilon as well as other chieftains. He invaded Lanka and collected rich tributes there. The ruler of Calicut and even the kings of Burma ruling at Pegu and Tanasserim paid tributes. He is considered the greatest ruler of Sangama dynasty was Deva Raya II. During his reign, AbdurRazzak, the envoy of Shah Rukh visited the Vijaynagara kingdom.He began the practice of employing Muslims in the army. He was called Immadi Deva Raya. In his inscriptions he has the title of Gajabetekara (the elephant hunter).

After the death of Deva Raya II, the empire was ruled by a series of some weak rulers. Since the rule of primogeniture was not established, there was a series of civil wars among the princes.

The founder of Saluva dynasty was SaluvaNarsimhan. He was a minister in the reign of Praudha Raya, the last ruler of Sangama dynasty. He crushed the rebellions of feaudatories and kept the kingdom intact. ImmadiNarsimha succeeded him. He was also known as DhammaTammaraya. He was a weak ruler and the control of state fell into the hands of NarsaNayaka. Vasco da Gama reached in Calicut during his time in 1498.Therulers of this dynasty were not able to establish law and order properly and that’s why the Suluvas ruled for a short period.

The third dynasty which ruled the Vijaynagarempire was Tuluva dynasty. The The dynasty was named “Tuluva” because they belonged  to the Tulu speaking region called “TULUNAD”. The greatest and successful king of Tuluvadynasy was Krishna Deva Raya who ruled from 1509 to 1539 AD. Some historians believed that he is the greatest ruler of the Vijaynagaraempire.

During the reign of Krishna Deva Raya, Vijayanagara emerged as the strongest military power in the south. He defeated the rebellious chiefs of Ummattur, the Gajapatis of Orissa and Sultan Adil Shah of Bijapur.

He suc­cessfully annexed Gulbarga and Bidar and reinstated the puppet Sultan Mahmud to the throne. To com­memorate this act of restoration he took the title of’ YavanarajyaSthapanacharya’ (The restorer of the Yavana kingdom). He invaded almost the whole of Telangana from the Gajapati king Pratapraudra and the Sultan of Golcunda.

He was a Vaishainaite but respected all the major religions. He was a devotee of Lord Venkateshwara of Tirupati. Vallabhacharya and ChaitanyaMahaprabhu, the celebrated saints of the bhakti movement visited his court. Madhwa saint Vyasathirtha was the Rajaguru of Krishnadevaraya. Krishna Deva Raya was known as Andhra Bhoja as he was also a great patron of art and literature. He wrote the Telugu work Amuktamalyada and one Sanskrit work JambavatiKalyanam. His court was embellished with the Ashtadiggajas (the eight well knownpoets), of whom, AllasaniPeddana was the greatest.His famous works include Manucharitam and HarikathaSaramsamu. Krishna Deva Raya also constructed the well known temples of Krishnaswamy, HazaraRamaswamy and Vitthalaswamy at his capital-city. Foreign travellers like Nuniz, Barbosa and Paeswrote about his systematic and effective administration and the prosperity of the empire during the reign of Krishna Deva Raya.

After the fall of Krishna Deva Raya, the internal struggle for succession followed among his successors. After the weak reigns of Achyuta Raya and Venkata, Sadasiva Raya succeded the throne in 1543, but the real power of administration was in the hands of Rama Raja popularly known as “Aliya” Rama Raya, was the progenitor of the “Aravidu” dynasty of Vijayanagar Empire. This dynasty, the fourth and last to hold  over the Vijayanagara Empire, is often not considered as a ruling dynasty of the empire. He took active part in Muslim politics and played off various muslim powers against each other. He successively defeated the Bijapur ruler and inflicted humiliating defeats on Golconda and Ahmadnagar.It seems that Rama Raya had no longer purpose than to maintain a balance of power favourable to vijayanagar between these three powers. But they soon understood his trick and joined hands with each other. Then the confederacy of the four states of Bijapur, Ahmednagar, Golkunda and Bidarjontly fought against the ruler of Vijayanagara in 1565 at Bannihathi near Talikota also known as the Battle of Rakshi-Tangadi. In the battle, Vijayanagar was defeated and Ram Rai was captured and murdered. The Muslim army entered the capital and looted and destroyed everything there and ruined the famous and beautiful city Vijaynagar.

The battle of Talikota is one of the most momentous and decisive battles in the history of India. It sounded the death knell of the great Hindu empire in the south India. With the fall of the Vijaynagaraempire and internal rivalry between the Muslim Kingdoms with one another after their victory, they fell singly and severally before the Mughal invaders from the north.

Later Tirumala, the brother of Rama Raya, dethroned Sadasiva Raya and captured the power and founded the last dynasty, Aravidu dynasty. During his reign the Southern Nayakas of Madurai and Gingee declared partial independence, while some others rebelled over Tirumala Deva Raya’s authority.